Dependence Injection, often just referred to as "DI", is a common concept in OOP languages, and especially in frameworks. It tends to get over-complicated, but a basic view is this:

Rather than your class/object creating the thing it depends on (DB Driver, Session Manager, etc), it takes it as part of its setup (constructor or setter).

This reversal of who is in control is also why DI is often referred to as a type of Inversion of Control Container or IoC.

Most often, DI in OOP means that your class takes another class, either as an argument in the constructor, or via a setter function. That's it in a nutshell.

Why it matters / importance

There are a bunch of reasons why DI is popular and has a significant impact on how a program works.

This is more advanced, so stop reading and review the previous sections if you don't yet understand the basics of DI.

DI, without any special setup, means that you still need some special setup, you are just reducing the amount of setup required and where it happens. But still, if your class has dependencies, then to construct your classes, the code calling it needs to provide the thing to be injected. If you have lots of things to inject, or they are highly complicated, this can make DI still complicated.

Dependency Injection Containers are a way to simplify this mapping of what your class needs to its creation. Essentially a container is responsible for:

A pattern for separating code by area of concern, which can be represented at its most basic level by this structure: 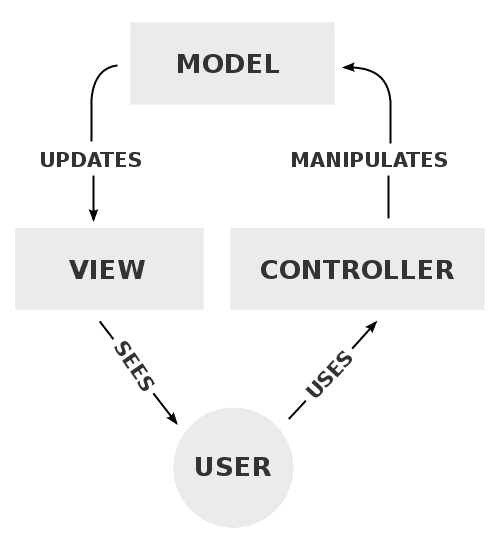 Where do routes fit in?

TLDR: Routes are another entrypoint to controllers, like Views, and should pass the request to the appropriate controller methods, while optionally performing some request logic and/or formatting the response.

In a lot of web applications, you deal with (virtual) routing, where your file structure does not mirror the URL in the browser, but your app routes the request to the right code. In an OOP lang/framework, you might have entirely separate classes and methods for routing.

In general, routes are coupled fairly closely with controllers, but should be considered a distinct layer, which can sit between the browser and the controller, just like View.

However, routes can also contain some logic, but you should be careful to keep business data logic in Models. The kind of logic that is common to see in routes, and is OK, is things like:

You can break down these types into the two major categories:

There are several tools on Windows that you can use to try and figure out which DLLs a program is dependent on:

What is Big O Notation

"Big-O notation is a relative representation of the complexity of an algorithm."

A more results-driven answer is that Big O Notation is a representation of how well, on the basis of few operations, an algorithm scales based on input size alone.

A short example is simply echoing back an array, versus logging something special for each input. E.g.:

The above example ignores the overhead of console.log() and makes some probably bad assumptions, and really is just for illustrative purposes.

Where const a is an array.